In the summer of 2019, a genetic counselor at an academic healthcare facility saw a 39-year-old African American woman who had been recently diagnosed with invasive ductal carcinoma. A mammogram and subsequent biopsy of the lump she had felt on her left breast turned out to be triple-negative breast cancer, an aggressive type of tumor that doesn't have estrogen or progesterone receptors and doesn’t overexpress HER2 protein. In the absence of these factors, triple-negative breast cancers are harder to treat and have limited treatment options. Her oncology team recommended chemotherapy to shrink her tumor and then surgery to remove it.

Because of her diagnosis of an aggressive cancer at a young age, her cancer care team referred her for genetic counseling. During the session, the genetic counselor and the patient discussed the extensive family history of breast cancer in the paternal side of her family (see below). 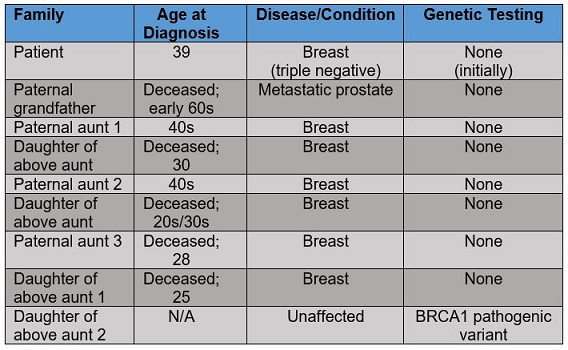 The patient recounted that she had three aunts, two of whom had breast cancer in their 40s, and a third who had died of the disease at age 28. All three aunts had lost daughters to breast cancer while they were in their 20s and 30s. One of the patient's cousins — one of the daughters of the third aunt — didn't have cancer but had gotten genetic testing that revealed a pathogenic variant in the BRCA1 gene, known to increase the risk of breast, ovarian, and other cancers. Because of this genetic risk, this cousin had gotten risk-reducing bilateral mastectomy and a complete hysterectomy with salpingo-oophorectomy.

Because of the strong history of early-onset breast cancers, as well as a known BRCA1 pathogenic variant in this family, the genetic counselor asked the patient if any of her doctors had ever mentioned she also get tested for the BRCA1 variant her cousin had. The patient had received routine care from an Ob/Gyn who was part of a private practice in the southwest region of the US. The patient told the genetic counselor that she asked this Ob/Gyn about genetic testing in the past, but the doctor had said she did not need testing as the variant was on her father’s side of the family.

The genetic counselor ordered genetic testing for this patient, and the results showed she harbored a BRCA1 pathogenic variant. The patient has three daughters, ages 22, 15, and 10, as well as a 41-year-old sister. The genetic counselor explained that this familial variant could also be inherited by her children and siblings, and increase their cancer risk, and that her adult daughter and sister should consider testing. Unfortunately, since this last appointment, the genetic counselor has not had any updates on the status of this patient.

The case is concerning because a 39-year-old woman's triple-negative breast cancer could have been avoided or detected sooner if her Ob/Gyn had ordered genetic testing earlier or referred her to someone else who could coordinate this testing. The patient could have been receiving increased screening or could have undergone risk-reducing surgery based on the results. The genetic counselor said this patient's story still haunts her.

This patient received cancer treatment in 2019 and had discussed her family history with her Ob/Gyn not long before that. By this time, it should have been well established among healthcare professionals that pathogenic cancer risk variants are just as likely to be inherited from the mother as from the father. Unfortunately, Meagan Farmer, a genetic counselor and genetic clinical operations director at My Gene Counsel, said healthcare providers still ask her whether paternal family history of cancer matters in assessing inherited risk. "I'm glad they ask, but I am surprised that question still comes up," she said, adding that she has also seen family history assessment questionnaires from clinics that only ask about maternal cancer history. "You might not think this happens today, but it still does."

While most guidelines still recommend testing for pathogenic cancer risk variants in genes such as BRCA1 and BRCA2 when patients have a family history of breast and ovarian cancer, studies have shown that as families grow smaller, there may not be many female relatives with these cancers to trigger increased surveillance and genetic testing.

Guidelines recommend healthcare professionals keep in mind that certain factors, such as small family size, incomplete family history knowledge, or a gender imbalance in the family structure, for example, few women relatives, may make it challenging to identify inherited cancer risk patterns. However, there were no such confounding factors for this family. "With her family history and having a BRCA1-positive relative, this patient would have always qualified for genetic testing," Farmer said, noting that unfortunately, this patient had to get cancer in order to finally be referred to a genetic counselor.

Studies have shown triple-negative breast cancer is more prevalent among non-Hispanic Black and Hispanic women under 40 years of age compared to women of European ancestry. Black and Hispanic triple-negative breast cancer patients also tend to have more aggressive disease that is diagnosed later and have poorer survival rates compared to women of European ancestry. 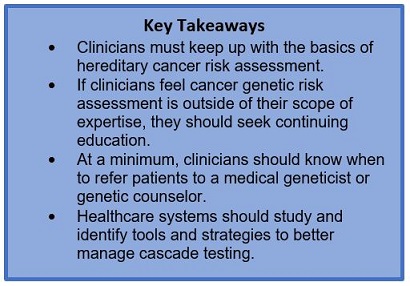 Based on this young, African American patient's family history of cancer and cousin with a BRCA1 pathogenic variant, the Ob/Gyn should have ordered genetic testing earlier or referred her to someone who could have. Although this patient was aware of her family's cancer history and a relative's BRCA1 test result, it's clear that she wasn't sure what this meant for her own cancer risk or if this warranted testing for herself. When she shared this information with her Ob/Gyn, the doctor told her the cancers on her father's side of the family were not of concern to her own health.

It's unclear if racial disparities factored into the care this patient received, but her experience certainly raises this question in Farmer's mind. "We tell our patients that they need to advocate for themselves, but that's admittedly easier for some than others," she said. "Some patients are listened to better than others, for instance, white patients as compared to those who identify as Black, Indigenous, or people of color. So, when their healthcare provider says that something is not important, some patients may find it intimidating to push back."

Moreover, this case points to the need to improve cascade testing, since the cousin's genetic test result should have triggered testing for this patient. Farmer noted there are efforts to improve cascade testing and highlighted as an example a recent National Cancer Institute-supported partnership between Vanderbilt University Medical Center, the University of South Florida, and My Gene Counsel to address the need for effective follow-up care, including testing for at-risk relatives, after the identification of hereditary cancer predisposition in patients.

Ultimately, this case highlights that some clinicians are still not familiar with basic concepts in hereditary cancer risk assessment. "Especially now that genetics is permeating every area of medicine and patients are asking questions about testing more often, at the very least, clinicians should realize that if they're collecting some medical and family history from patients, there are going to be times when genetics evaluation is appropriate," Farmer said. "They don't have to do the genetic evaluation themselves, but they at least have to have a plan to refer patients to genetics experts if they feel this risk assessment is not something they can do."