Precision Oncology News and My Gene Counsel have partnered to produce the "Genetic Testing Challenges in Oncology" series to highlight real-world issues that genetics experts and medical professionals are encountering as genetic tests are increasingly used in cancer care. Experts submit anonymized case reports to My Gene Counsel, and based on the details in these reports, Precision Oncology News writes a feature that describes the case history, challenges encountered by professionals in dealing with the case, and strategies they used in response to challenges or errors. The features also include a discussion with My Gene Counsel genetic counseling experts on better approaches that could be considered if similar cases are encountered in the future. In publishing this series, our aim is to educate experts in the field and foster discussion. If you would like to submit a case report, please email [email protected]

A 27-year-old woman, who five years earlier had learned she harbored a pathogenic variant in the BRCA1 gene, was now considering removing her breasts and ovaries to reduce her risk for breast and ovarian cancer. She came to see a genetic counselor to discuss her options. The patient was tested when she was 22 years old because her mother had breast cancer in her thirties and carried a BRCA1 pathogenic variant. Her mother received genetic testing several years prior. The patient's mother, because of her cancer diagnosis and the genetic test result, underwent bilateral mastectomy and risk-reducing salpingo-oophorectomy when she was 35.

As the genetic counselor prepared to see the patient, she looked at her report and noted that the analysis had been done five years ago by a large commercial lab that isn't well known for hereditary cancer testing. As such, she wanted to ensure this lab's classification of the BRCA1 variant as "pathogenic" — meaning it was harmful and associated with increased cancer risk — was consistent with the classification by other genetic testing labs.

She checked the public database ClinVar. All other labs in the database that had seen this BRCA1 variant reported it as a "variant of uncertain significance (VUS)," meaning there is insufficient evidence to definitively determine if the genetic variant is disease causing or benign.

The genetic counselor called the lab that performed her patient's testing, and the genetic counselor who worked there said that this lab hadn't encountered this specific BRCA1 variant since it had been detected in this patient. The lab agreed to reanalyze the variant.

Meanwhile, the genetic counselor met with the patient for her appointment and explained that there was a high likelihood that her BRCA1 variant may be downgraded from pathogenic to an uncertain classification, based on which providers and patients should not make decisions about medical management, including risk-reducing surgery.

As the genetic counselor suspected, the lab reclassified this variant to a VUS. The genetic counselor also called the lab that tested the patient's mother, which was not the same lab that tested her patient, and asked how they currently classified the BRCA1 variant. This lab had downgraded the variant to a VUS. However, the patient's mother had not been made aware of the change. Because the mother was not this genetic counselor's patient, she could not obtain an updated test report on her behalf.

The genetic counselor sympathized with the mother and said she made the right decision based on the available evidence at the time. She took the opportunity to educate the mother and daughter that the classification of variants, particularly ones that have been seen by labs a limited number of times, can change as more patients are seen with them and their role in diseases like cancer becomes clearer. The genetic counselor recommended the mother reach out to the testing lab and ask for an updated report. She also recommended the mother consider panel testing in case she has an identifiable pathogenic variant in a gene other than BRCA1/2. The genetic counselor does not know whether she pursued this.

Given that the patient's mother had limited BRCA1/2 testing and the patient did not know much about her paternal family history, the genetic counselor ordered a multigene panel through a reputable lab in the area of hereditary cancer testing. This lab detected the original BRCA1 variant and classified it as a VUS. The lab also detected a second BRCA1 VUS, which the mother did not have, so the patient likely inherited it from her father.

The genetic counselor told her patient that she should not have risk-reducing surgeries based on the identification of these BRCA1 VUS alone and instead should be followed based on family history. Given her mother's history of early-onset breast cancer, the patient qualified for earlier and increased breast cancer screening, and the genetic counselor referred the patient to a high-risk breast clinic so she could receive it.

This case illustrates how standard lab and medical practices can fail patients when providing care based on genetic test results. It is concerning that this young woman was considering removing her breasts and ovaries at age 27 based on outdated information on the clinical significance of a genetic variant, which may have been in part due to the lab's relatively limited cancer genetic testing volume. Meanwhile, the lab that analyzed the mother's variant had updated the classification in its database, but she was never informed of the change.

In the case of the daughter, the lab didn't do much hereditary cancer testing and had only seen this one patient with this BRCA1 variant. As such, the initial pathogenic classification may have been largely based on the fact that the patient's mother had the same variant and had developed cancer at an early age. While this lab did submit variant data to ClinVar, the genetic counselor's account raises questions about the lab's policies and procedures for re-evaluating variant classifications in its database based on the most up-to-date evidence, including using ClinVar to track how other labs are classifying the same variants. Such iterative reclassification policies are considered best practices by experts in this type of analysis, but are not standard practices among genetic testing labs.

It's not clear where the communication channels fell through in the mother's case, observed Meagan Farmer, a genetic counselor and genetic clinical operations director at My Gene Counsel. The lab should have informed the ordering physician of the classification change and the doctor then should have told the mother. If those things didn't happen on the part of the lab or the doctor, that's problematic, said Farmer.

Still, there are other opportunities in the broader healthcare ecosystem for this type of information to get lost. "Maybe a fax didn't go through from the lab to the doctor. Maybe the clinician left the practice. Maybe the mother's phone number changed," Farmer said, adding that faxes and phones are still readily used to communicate critical healthcare information to patients, which is not optimal.

In this case, there were a few red flags that prompted the genetic counselor to double-check the daughter's variant classification in ClinVar: Five years had elapsed between when the young woman had gotten tested and her genetic counseling visit, and the testing lab was not known for hereditary cancer testing. Even though variants classified as pathogenic can be downgraded, this is relatively rare, and therefore patients, and even providers, may accept a lab's pathogenic determination as definitive and correct. It is much more common for patients, genetic counselors, and providers alike to ask about or look into VUS classifications, though the majority of these are reclassified as benign.

The mother in this case was understandably shaken to learn that the test result that led her to have risk-reducing surgeries, a decision that carries significant health, reproductive, and quality-of-life consequences, was no longer valid. "While the decision to get surgery was difficult, it probably felt lifesaving to her at the time," Farmer said. "And now, she's thinking her daughter is making the same lifesaving decisions potentially, but suddenly she is being told none of it needed to happen." 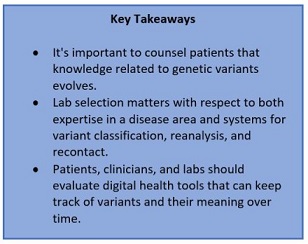 Despite numerous calls from organizations such as the American College of Medical Genetics and Genomics and the Association for Molecular Pathology for genetic testing labs to share their variant classification data with each other and in easily accessible databases like ClinVar, not all labs do. For example, the lab that tested the mother does not submit to ClinVar. Moreover, there aren't standard practices among labs when it comes to recontacting patients and doctors when a genetic variant is reclassified or management guidelines related to a variant changes.

"Not all labs are equal," Farmer cautioned, adding that when ordering genetic testing, doctors should not only consider a lab's expertise in a disease area, such as hereditary cancer testing, but also its variant data sharing and classification practices. For example, doctors should look into how often labs analyze variants they've detected in patients, how do they evaluate the links between variants and disease, and if a variant's classification is changed based on new evidence, what do they do to inform providers and affected patients. Unfortunately, many doctors don't know to ask those questions, Farmer observed.

Patients also need to be better educated that the clinical meaning of genetic variants can change over time. While genetic counselors routinely tell patients to keep their contact information up to date and check in periodically for the latest information on their variant and management guidelines, this doesn't often happen.

"Patients with pathogenic variants, like in this case, are probably even less likely to do that because they feel like they have their answer," observed Farmer, who encourages her patients to advocate for themselves but also feels it's not right to put this responsibility squarely on them.

"The truth is, if we heard from every patient and every clinician for updates on variants … we couldn't actually handle that because the traditional approach isn't scalable," Farmer reflected.

There are now technology-enabled systems that automatically update doctors and patients when new information emerges about their variant or guidelines change about how to manage patients with specific variants. Such systems can be a way of avoiding the pitfalls seen in this case, said Farmer, who works for MyGeneCounsel, a company that offers such a platform. "We need those tools because patients aren't being served well by this archaic system dealing in faxes and telling patients to call us back every year," she said.