A dermatologist saw a 63-year-old male with multiple basal and squamous cell carcinomas and one sebaceous carcinoma. Genetic testing of the sebaceous carcinoma sample revealed loss of MLH1/PMS2, based on which the dermatologist worried that the patient's skin tumors may be a sign of an inherited cancer predisposition syndrome called Muir-Torre. This genetic condition is a type of Lynch syndrome that can increase the risk of skin tumors as well as cancers of the gastrointestinal and genitourinary tract. According to the patient, he and his family members had a history of colon polyps.

In 2018, the patient's dermatologist sent him for further genetic evaluation. The genetic counselor ordered a genetic testing panel for Lynch syndrome and inherited conditions known to increase the risk of colon and other cancers. The genetic test came back negative. The clinic notes and the letter that accompanied the test report emphasized that this patient did not meet clinical diagnostic criteria for Lynch syndrome and that any screening he received should be based on his personal and family history of colon polyps.

The patient had less than 10 colon polyps. He came from a large family with several first- and second-degree relatives who had cancer but lived until old age. However, there were no relatives with colorectal, ovary, or uterine cancers, as would be expected in a family affected by Lynch syndrome.

Current screening guidelines recommend that patients between ages 45 and 75 and at average risk for colon cancer, should have colonoscopies every 10 years. However, patients with a personal or family history of colorectal cancer or colon polyps, or patients with Lynch or another inherited cancer syndrome associated with heightened colon cancer risk, may be eligible for more frequent screenings.

In 2022, the patient's gastroenterologist noticed that his dermatologist still maintained he had a clinical diagnosis of Lynch syndrome, and based on that diagnosis, the man was having cancer screening and annual colonoscopies. The gastroenterologist had noted in the patient's medical record the earlier negative genetic test result for Lynch syndrome, and perhaps to clear up any confusion about the need for annual colonoscopies, sent him back to the same genetic counselor.

It is concerning that this patient's dermatologist ignored his personal and family medical history and a negative genetic testing result and diagnosed him with Lynch syndrome. By doing so, the dermatologist subjected this patient to medically unnecessary screening. "A lot of people don't realize that annual colonoscopies are associated with their own risks, especially as people get older," said Ellen Matloff, a certified genetic counselor and president and CEO of My Gene Counsel. "There is a small risk of infection and perforation. There's a risk that the prep could dehydrate someone and lead to secondary issues. And it's also expensive and can lead to out-of-pocket expenses for patients."

The average colonoscopy costs around $3,000. "You don't just randomly do yearly colonoscopies on everyone," Matloff said.

She understands, however, why this dermatologist may have been initially concerned about an inherited cancer predisposition syndrome. When patients have hundreds or thousands of basal cell or squamous cell carcinomas, that could indicate Gorlin syndrome, for example. And lots of sebaceous carcinomas could be a tipoff that the patient has Muir-Torre syndrome. "When the dermatologist sent the patient's [sebaceous carcinoma] sample for analysis of MLH1/PMS2 loss, that's what he was thinking of," Matloff suspected. "I get it."

However, MLH1/PMS2 loss in tumor tissue doesn't mean that this patient has inherited a germline mutation in genes associated with Lynch syndrome. Some patients demonstrate a somatic loss of these proteins in tumor tissue and do not have a germline mutation. Additionally, this patient had one sebaceous cancer and none of his relatives in his rather large family had Lynch syndrome-related cancers and most of them lived to older ages. "Between his personal history, family history, and the genetic test results, not once but twice coming back negative, saying this patient definitely still has Lynch syndrome based on this one finding of MLH1/PMS2 loss does not make sense," Matloff said.

Based on this patient's personal and family history of colon polyps, a healthcare provider may have felt it prudent to come back for another colonoscopy in five years. But annual screenings based on a Lynch syndrome diagnosis in this case appears to be an inappropriate use of medical insurance, Matloff added. 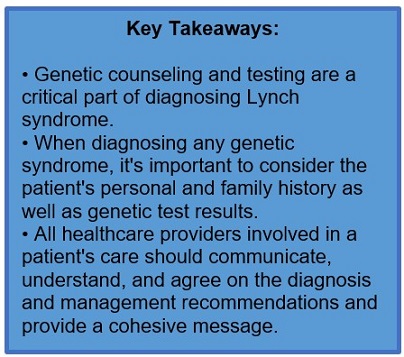 Genetic testing and counseling are a critical part of Lynch syndrome diagnosis, and the dermatologist should not have ignored the test results, the genetic counselor's original determinations, and the patient's personal and family history of cancer.

This case is an example of the need for healthcare providers "to be really cautious about labeling patients with a syndrome without the assistance of a genetic professional and genetic testing," Matloff said.