This past summer, an endocrinologist saw a 30 year-old female patient receiving treatment for Cushing's disease, a condition where too much cortisol exposure causes a hormonal imbalance in the body. The woman's condition was due to a pituitary adenoma, a type of benign tumor. However, the doctor also noted that this patient had been diagnosed with breast cancer five years earlier at age 25, and subsequently, her mother developed pancreatic cancer and was diagnosed with Li-Fraumeni syndrome.

Individuals with this inherited disorder are at greatly heightened risk of early-onset cancers, with breast cancer occurring most commonly in young women with LFS. In nearly three-fourths of LFS patients, the condition is associated with a pathogenic variant in the TP53 gene. Based on this woman's and her mother's prior cancer history and the mother's LFS diagnosis, the endocrinologist referred this patient to a genetic counselor.

At the genetic counseling session, the patient revealed that at the time of her 2017 breast cancer diagnosis, she received genetic testing. The genetic counselor asked the testing lab to send her a copy of that report, which showed that this lab had tested the patient for variants in 28 genes associated with increased cancer risk and found two variants of uncertain significance in MSH2 and TP53. But the lab had updated these results in 2018, and the genetic counselor noted that the TP53 VUS had been reclassified to a pathogenic variant associated with LFS.

The genetic counselor asked the patient what she understood about her own diagnosis as well as her family's cancer history. The patient recounted that when she was diagnosed with breast cancer five years ago and received genetic testing, the results came back negative. Specifically, the patient recalled that her "BRCA testing was negative." Then, in 2020, when her mother was diagnosed with pancreatic cancer, she had genetic testing and was diagnosed with LFS based on the results. The genetic counselor noted different labs performed the tests on the daughter and the mother.

The patient became distressed when the genetic counselor explained that she, like her mother, had LFS, even though the lab in 2017 had initially interpreted the detected TP53 variant as a VUS. The genetic counselor further informed the patient that she should be screened frequently for various cancers because of this diagnosis and that her children should also be tested for the same TP53 variant.

Despite having breast cancer at age 25 and a mother with LFS, this patient spent several years in the dark about her own cancer risks and missed out on appropriate screening. The lab that tested the daughter updated the TP53 VUS for the patient to a pathogenic classification associated with LFS in 2018. Had the ordering physician noted this and notified the patient, she would have been diagnosed with LFS and received the appropriate screening. It is concerning that in 2022, the patient seemed completely unaware that her test results were updated four years before, until the genetic counselor informed her.

Even if the oncologist failed to note the updated test results in 2018, there was a second opportunity to diagnose the patient with LFS in 2020, when the mother was diagnosed with LFS. Ideally, this information should have been shared with the patient's oncologist, who could have used it to diagnose the patient with LFS. It's unclear why this didn't happen. "If you have a Li-Fraumeni syndrome family with a known mutation and this woman is diagnosed at a such a young age with breast cancer, she has LFS, until proven otherwise," said Ellen Matloff, a certified genetic counselor and president and CEO of My Gene Counsel. "And if she tested negative for that familial mutation, I would be highly suspicious that something went wrong here."

The case is further troubling because the patient seems to have poor understanding of her own genetic test results from 2017, according to Matloff. When asked about it, the patient said she thought she didn't have any pathogenic variants in BRCA1/2, and as a result wasn't at increased risk for future cancers like her mother. Pathogenic variants in BRCA1/2 increase the risk of breast, ovarian, and other cancers. But there are other genes, which when dysregulated by inherited mutations, can cause cancer risk syndromes like LFS.

BRCA1/2 are the best-known cancer risk genes and clinicians and patients alike make the mistake of equating all breast cancer risk with pathogenic variants in these two genes. As a genetic counselor, Matloff has seen patients who have a false sense of security that they aren't at risk for cancer because they're "BRCA negative" despite findings in other genes that suggest otherwise.

"It is concerning that even today people think there are only two genes associated with breast cancer, BRCA1 and BRCA2," Matloff said. "They don't understand the nuances of the other genes found on panels that are also associated with breast cancer. They also don't understand the implications for screening and surveillance for the patient and their family members, that not only testing but of careful examination of the family history would warrant." 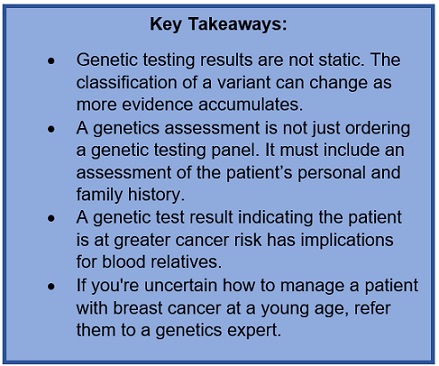 Because of the delayed LFS diagnosis, this patient failed to receive timely cancer screenings. A 30-year-old with LFS should receive a yearly whole-body MRI, including brain scans, and dermatologic exam, and a colonoscopy and upper endoscopy every two to five years starting at age 25. Moreover, the patient's two children should have been tested for the familial TP53 variant, which can also increase pediatric cancers. If the children do harbor the same variant, they would also have to be frequently screened for cancer.

Genetic screening guidelines advise doctors not to make clinical decisions based on VUS results. However, the lab that tested the patient updated the VUS classification to pathogenic in 2018, and at that point, the patient should have been diagnosed with LFS.

Moreover, the patient could have been referred to a genetics expert earlier. There were multiple missed opportunities for this — first, when she was diagnosed at a young age with breast cancer and had genetic testing, then when the genetic test results were updated, and lastly, when the mother was diagnosed with LFS. At any of these points, a genetic counselor would have been able to explain to the patient the importance of family history and genetic testing in assessing cancer risk, and once it was known the patient had a pathogenic TP53 variant, explained the need for increased screening and advised testing for blood relatives including her kids and mother.

"Unfortunately, many clinicians now rely solely on genetic testing panels and do not examine the personal and family cancer history as part of the diagnostic process," Matloff said. "This patient's diagnosis of breast cancer at age 25 points to LFS. This history with a strong family history of cancer screams LFS."

The main issue in this case is that the patient was totally unaware of the 2018 update to her test result indicating she had a pathogenic TP53 variant. With more people getting genetic testing, it is not uncommon for patients' results to change over time as labs see the same variants in others and gain better understanding of disease biology.

Although the lab in this case likely would have informed the oncologist of the variant classification change, at present, it's unclear whose responsibility it is — the ordering physician's or the lab's — to inform patients of updated variant classifications. The disjointed US healthcare system makes it difficult to keep track of patients, so that when they change doctors or move out of a healthcare system, it may not be possible for physicians that initially ordered genetic testing to locate and inform patients about updated results.