Genetic Testing Challenges in Oncology: Prior Retinoblastoma Not Considered in Test Ordering

A woman in her 20s was concerned about her risk for breast cancer because her mother had previously had it. She saw a medical oncologist and wanted to be tested to see if she had inherited any pathogenic genetic variants that could increase her risk for developing breast cancer. The oncologist ordered a genetic test panel that assessed a couple dozen genes mainly associated with breast, gynecologic, and colorectal cancers from a well-regarded lab.

The patient's insurance company required evaluation by a genetic counselor to determine if genetic testing was "medically necessary" before covering it. The test requisition form, which had been shared with the genetic counselor, indicated that the doctor had ordered testing for a patient who did not have cancer but whose mother did, but her mother was still living and had not yet been tested. And while the patient was concerned about her family's experience with cancer, the genetic counselor did not find it to be very striking — the patient's mother was not particularly young when she got breast cancer, in her 50s, and there weren't multiple cancer diagnoses in the extended family.

When the genetic counselor met with the patient, she noticed that the young woman had strabismus, or misalignment of the eyes. When asked, the patient told the genetic counselor that she had a glass eye after she got retinoblastoma as an infant and had one eye surgically removed. Subsequently, the patient developed lymphoma. The test requisition form did not mention that this patient had two cancers at an early age.

Retinoblastoma is a common form of eye cancer that occurs in children. Around 40 percent of patients have an inherited predisposition for retinoblastoma, while others have non-hereditary forms of the cancer. Patients with hereditary retinoblastoma have a pathogenic variant in RB1, a gene, which the genetic counselor noticed was not included in the test panel this patient's oncologist ordered. Studies have found that retinoblastoma patients with an inherited RB1 pathogenic variant have a 22 to 51 percent risk of developing secondary primary tumors and are more likely to die from these other cancers compared to patients that don't have these variants.

The genetic counselor informed the patient that it is possible that as an infant she had a hereditary form of retinoblastoma. The patient was hoping to start a family soon and wanted to know if she had inherited a pathogenic variant in a cancer predisposing gene like RB1 that she could pass on to her children. The genetic counselor cancelled the original test ordered by the oncologist and ordered a multigene panel that included RB1 and other genes associated with increased risk for hereditary breast cancer.

The test report indicated that the patient did not inherit any cancer predisposition mutations.

In this case, a young woman with two prior cancer diagnoses was not asked about them by an oncologist who was supposed to be evaluating her cancer risk to determine her eligibility for genetic testing. It is concerning that the oncologist in this case seems to either not have asked the patient at all about her own cancer history, or if the oncologist did ask, then deemed patient's prior retinoblastoma and lymphoma as not relevant when developing a genetic testing strategy. Alternatively, but still concerning, the oncologist may not have realized when ordering the multigene panel that it would not evaluate the patient's genetic risk for retinoblastoma.

"You can't assume that a patient will volunteer all pertinent information. You really have to ask," said Meagan Farmer, director of the cancer genetic counseling program at the University of Alabama at Birmingham and genetic clinical operations director at My Gene Counsel. "I've gotten all the way through a genetic counseling appointment and pulled out the genetic test kit to send to the lab, and the patient says, 'Oh yeah, I remember having a test like this. It was positive.'"

Farmer, who is also an instructor within UAB's genetic counselor training program, reminds students that "it may seem crazy" to remember to specifically ask patients if they've ever had cancer or prior genetic testing, but sometimes patients don’t volunteer this information. "It happens. It's not uncommon," she said.

Awareness of genetic testing, particularly for cancer risk genes like BRCA1/2, has increased in recent years, leading to more unaffected women seeking out testing from healthcare providers. One study published last year, showed that 10.5 percent of BRCA1/2 tests conducted in the US in 2006 were for women younger than 40 years old who did not have breast or ovarian cancer but by 2017, 25.5 percent of such tests were being performed in young, unaffected women.

There are now genetic test panels available from multiple labs for assessing hereditary risk for breast and ovarian cancers that include BRCA1/2 and dozens of other genes associated with these and other cancers. These tests tend to be heavily marketed by labs and frequently ordered by some oncologists. "When this seemingly healthy patient in her 20s came in and said she was concerned about her own risk of breast cancer because her mom had it, it may be that the oncologists just ordered a genetic test panel that included genes associated with breast and ovarian cancer risk and didn't think to ask if she had ever had cancer previously," Farmer said. "But it's always a good idea to ask."

In this case, although the genetic test results came back negative, indicating that the patient was unlikely to have hereditary retinoblastoma, based on her personal and family history, the test panel ordered by the genetic counselor, containing the RB1 gene, was appropriate and necessary. The oncologist should have taken a thorough medical history from the patient as well as her family's cancer history when considering which genetic test to order. Farmer emphasized that when ordering genetic testing, one must do so in the context of all cancers diagnosed in the patient and in blood relatives. "If the doctor's go-to genetic testing panel doesn't cover all the cancers relevant to the case, then a different test needs to be ordered that does," she said. 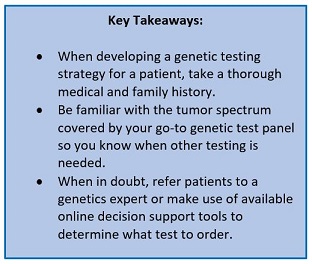 Farmer acknowledged that not all oncologists may be familiar with the genetic underpinnings of hereditary retinoblastoma or may not think to test for RB1 specifically. But in times of uncertainty, "when a clinician is unsure of what test or panel to order in a case like this, they should refer the patient to a genetic counselor," she said.

This patient, fortunately, did see a genetic counselor who ordered the right test, not because the oncologist referred the patient, but only because it was required by the insurance company for payment purposes. Because insurers' spending on genetic tests have increased in recent years in step with growing demand, a number of payors now require patients speak to a genetic counselor to determine whether tests ordered by their doctors meet their criteria for coverage. While insurers may be implementing these policies hoping to rein in unnecessary spending on inappropriately ordered tests, as was the case here, studies have also tracked negative effects of these requirements.

"Someone may look at this case and say the insurer's requirement for genetic counseling prior to testing worked here and it should be the standard, but it's just not that simple," Farmer said. "Studies have looked at the impact of insurers' pretest genetic counseling requirement from the patient perspective and found really minimal evidence for utility."

A study funded by testing lab Myriad Genetics, for example, showed that insurers' pretest genetic counseling policies neither improved patients' ability to understand test results nor did they identify more patients with pathogenic variants. However, because of the counseling requirement, low-income patents were less likely to get tested at all. Another study looking at the impact of insurers' pretest counseling policies, again led by experts from Myriad, showed an increase in genetic test cancellation rates, even among those who met guidelines for testing, with cancellations more pronounced among individuals of African or Latin American ancestry.

"We don’t want errors like the one in this case to occur, but payer requirements for genetic counseling may not be the solution," Farmer said. "Clinicians need more point-of-care tools to help them identify people for whom genetic testing is appropriate, help them select the appropriate genetic test, and help them interpret and apply the results over time."

Such decision support tools are necessary particularly now that more patients are asking for and getting genetic testing. "Genetic testing no longer happens in genetics clinics alone," Farmer said. "Those of us who are genetics experts need to be thinking about how we can develop programs and tools to responsibly support point-of-care testing."