NEW YORK – As more precision oncology drugs are coming to market and expert bodies are recommending a variety of biomarker tests for patients during earlier stages of disease, cancer centers around the country are engaging molecular tumor boards to help oncologists keep up with advances and make clinical decisions based on test reports, according to a recent survey.

Precision Oncology News queried individuals including oncologists, program directors, and administrators with knowledge of precision oncology efforts at 20 healthcare institutions around the country to understand the investments they are making to facilitate cancer patients' access to biomarker testing and precision oncology treatments, and to address barriers that still remain.

In this third annual precision oncology survey, conducted between July and November, 45 percent of respondents were from a National Cancer Institute-designated comprehensive cancer center, 30 percent were at a cancer center within a healthcare system, and the rest were from a university-affiliated cancer center, a nonprofit healthcare network, or private oncology practice.

As captured in the 2020 survey, this year, institutions are continuing to invest in internal capabilities to assess single genes associated with response to targeted drugs as well as immunotherapy biomarkers and are conducting targeted next-generation sequencing panels. Specifically, half of respondents this year indicated the ability to perform single-gene testing in-house, 45 percent said they could internally test for immunotherapy biomarkers, and 35 percent said they had in-house targeted NGS capabilities.

A 2019 survey by Novartis showed that a growing number of institutions had begun investing in internal NGS capabilities. While 83 percent of respondents to that survey said their organizations ordered NGS testing from commercial labs, there was a 58 percent increase from 2018 to 2019 in respondents reporting they could do NGS testing within their own labs.

However, in 2021, Precision Oncology News' survey still shows a lot of biomarker testing is still reliant on commercial labs, most popular being Foundation Medicine, Guardant Health, Tempus, and Caris Life Sciences. For example, three-fourths of respondents indicated they send out liquid biopsy testing, at least half said they use commercial labs for whole-genome, RNA, and exome sequencing, and 45 percent said doctors order targeted NGS panels from outside labs.

In terms of immunotherapy biomarkers, the vast majority of respondents indicated that at their institutions, patients under consideration for treatment with checkpoint inhibitors are tested for microsatellite instability and PD-L1 expression. Eighty percent of respondents said patients are also assessed for tumor mutational burden to guide immunotherapy decisions compared to around two-thirds of respondents in last year's survey who noted TMB was performed. The uptick in TMB analysis is likely the result of the US Food and Drug Administration's June 2020 approval of pembrolizumab (Merck's Keytruda) for any refractory solid tumor with TMB of at least 10 mutations per megabase. 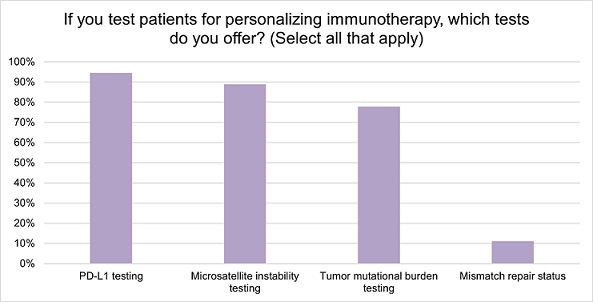 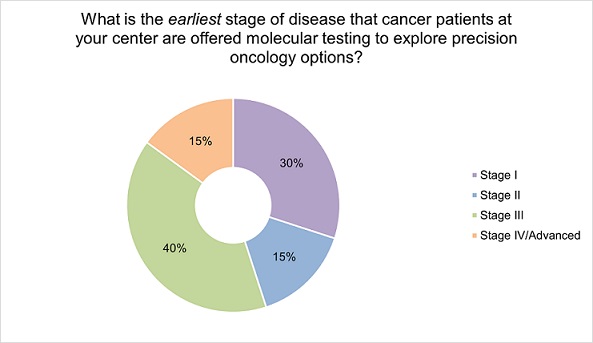 The survey also asked respondents when their institutions encouraged oncologists to order germline genetic tests for cancer patients. Expert bodies such as the American College of Medical Genetics and Genomics have noted the importance of germline genetics alongside somatic testing when developing a treatment plan for cancer patients, since many studies have shown that using family cancer history alone may miss more than half of those with inherited risk mutations. The FDA has also approved drugs for tumors that harbor germline and somatic mutations in cancer-associated genes, such as BRCA1 and BRCA2. Knowledge of these mutations can inform not only treatment but also management strategies to reduce patients' and their relatives' future cancer risks. 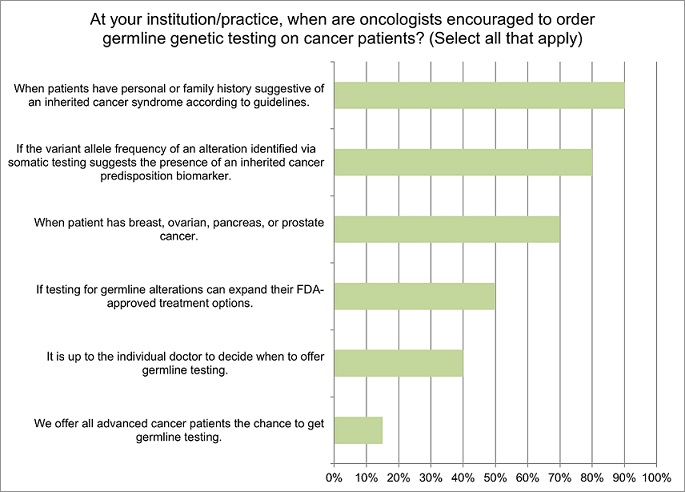 Eighteen out of 20 respondents to this survey said oncologists at their institutions relied on family cancer history to guide germline genetic testing decisions. However, since using family history alone can miss a significant number of patients who harbor cancer risk mutations, respondents encouragingly indicated that oncologists are also using other parameters when deciding whether to assess germline genetics for a patient.

From testing to precision treatment

Given the growing number of therapeutically actionable biomarkers and the range of tests available to oncologists today, it's no surprise that they need help making sense of test reports. In this survey, the majority of institutions are providing that support through internal molecular tumor boards or bringing in precision oncology expertise via virtual MTBs. 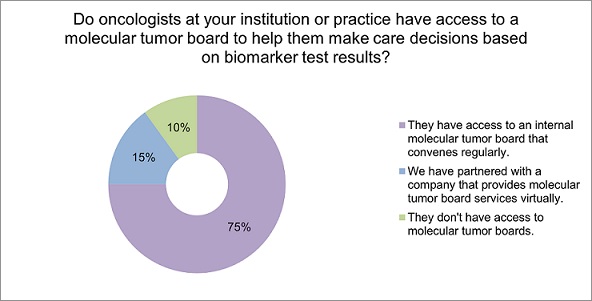 However, even when patients receive biomarker tests, they may not receive actionable results, or the results may come too late to influence decisions about treatment or clinical trials. Tissue insufficiency was the most frequently cited reason in this survey for why patients aren't receiving precision cancer care, followed by the lack of identified actionable biomarkers and slow test turnaround time. 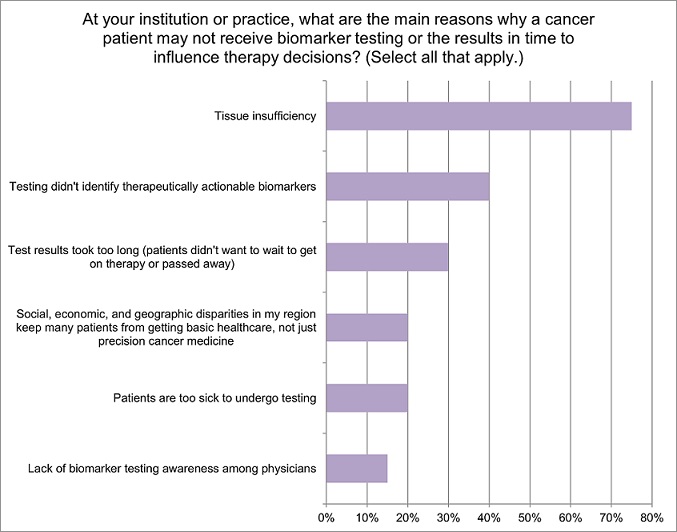 While some cancer centers are trying to improve tissue requisition and turnaround time for biomarker testing by streamlining organizational procedures, other challenges limiting healthcare access, such as longstanding racial biases, will take longer to mitigate. The pandemic put a spotlight on these issues and energized discussions around how to improve systemic and racial barriers to accessing basic services as well as advanced treatments, like precision cancer drugs. In fact, several studies at the American Society of Clinical Oncology's annual meeting this year highlighted inequities in access to therapeutically actionable biomarker testing among lung and prostate cancer patients.

In this survey, respondents from four institutions acknowledged that social, economic, and geographic disparities in the region in which their institution is located hinder many patients from getting basic healthcare including precision medicine. Four respondents, meanwhile, said often patients are too sick to undergo biomarker testing, and three cited physicians' lack of awareness about testing as a barrier.

Since a cancer patients' best chance of getting precision treatment is often within a clinical trial, this survey also explored the accessibility of readily biomarker-informed studies. Even though all institutions, except one, represented in this survey are running precision oncology trials, such as biomarker-informed single- and multi-cohort studies, a minority of tested patients are getting the chance to partake in them. 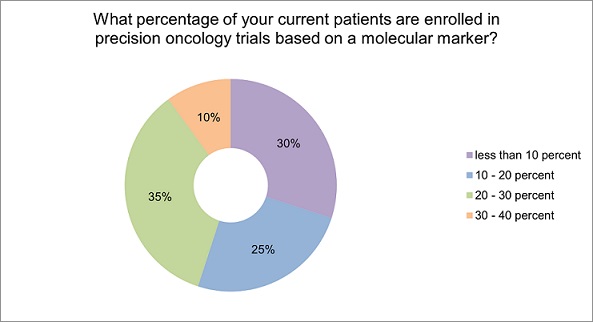 Out of 12 respondents that indicated 20 percent or fewer patients at their institutions enroll in precision oncology trials, the majority said other enrollment criteria often hindered patients from getting on a study that they matched to based on a tumor marker. Around 25 percent said patients' unwillingness to travel limited their ability to access trials. Of the respondents who wrote in other reasons, one cited that the time and effort necessary to find trials for patients were barriers.

Difficulty accessing clinical trials, however, is not the biggest challenge oncologists face in delivering precision oncology to patients. Respondents most frequently cited the rapid pace of advances in terms of actionable biomarkers and changing guidelines as the top hurdle for oncologists trying to practice precision oncology, overtaking restrictive insurer policies, which was the top challenge for the field in the 2019 and 2020 surveys. Like in past surveys, respondents continue to flag IT challenges, such as the lack of biomarker test result integration in electronic medical records and no clinical decision support. 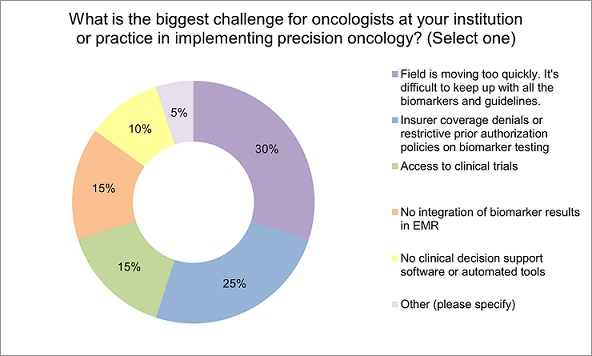 One respondent said it can be particularly challenging to justify the cost of keeping clinical trials open that aren't enrolling because the biomarker of interest shows up rarely in cancer patients. In such cases, when the precision oncology trial is taking a long time to enroll, the institution may want to shut it down, the respondent said. 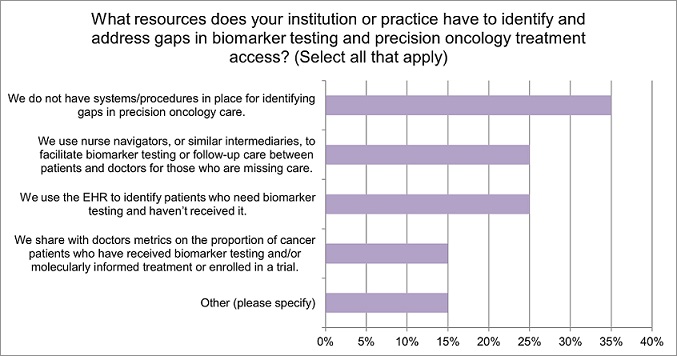 When asked what resources institutions have to flag access gaps in precision oncology, a quarter of respondents noted the use of nurse navigators or the EHR to identify patients not receiving appropriate care. At one respondent's institution, the precision medicine team identifies the needs and opportunities for improvement for patients with specific disease states.

Ultimately, 15 percent of respondents said that doctors at their institutions are aware of the proportion of patients receiving biomarker testing and molecularly informed care. However, 35 percent, or seven respondents, said their cancer center or health system didn't have any systems in place for tracking whether patients have equitable access to biomarker testing, trials, and precision therapies. 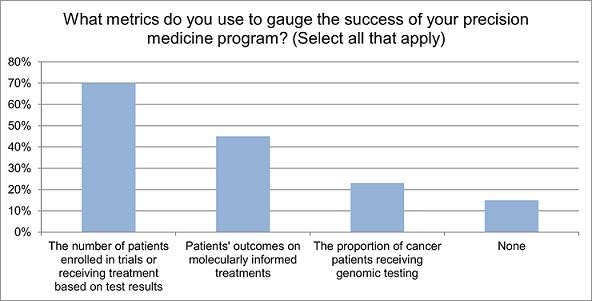 On the other hand, when asked how their institutions are measuring the success of their precision oncology programs — as opposed to how they're measuring gaps in access — only two respondents said their cancer centers don't have such metrics in place. This year, as in last year's survey, respondents commonly said they looked at the number of patients enrolled in trials or receiving treatments based on biomarker test results, as well as the proportion of patients who received testing. Notably, nine respondents, or 45 percent, said their institutions considered patients' outcomes on molecularly informed treatments when assessing if precision oncology programs are actually benefiting patients — an improvement compared to only four respondents who cited this in 2020.

In conducting this survey, Precision Oncology News reached out to individuals in leadership positions at cancer centers, hospitals, and community practices around the country, and made a particular effort to reach smaller institutions and practices. While the 20 respondents are from institutions located all over the US, more NCI-designated comprehensive cancer centers and large regional facilities are included, and therefore, facilities that have made early and significant investments in precision oncology continue to be overrepresented in the survey. The challenges and access gaps identified in this survey are sure to be more pronounced within community practices with limited resources, where most cancer patients in the US receive care.

We'd like your feedback! Precision Oncology News conducts this survey annually. Please contact us if you are interested in participating in next year's survey or if you have ideas for additional themes or questions.